School of Law of law alumni Teddy Musiga and David Sigano have published an advocates practicing manual for the East African Court of Justice (EACJ).

The two published the manual together with Hanningtone Amol, Chief Executive Officer of the East Africa Law Society.

Below is more information about the  publication

When the East Africa Law Society undertook a baseline study on the status of implementation of decisions of the East African Court of Justice and level of awareness of the Court among East Africans, there were two outstanding outcomes. First, many advocates across the region were found to have limited understanding of how the Court functions. They also had limited knowledge of the rules of procedure of the Court. On further investigation, it was found that this had led to two undesirable outcomes. Low quality of pleadings submitted before the Court and high rates of dismissal of cases on technicalities. Secondly, the study found that most people in the region are unaware of the existence and mandate of the Court. This has led to under-utilisation of the Court, a key institution established to oversee the implementation of the Treaty for the Establishment of the East African Community.

This booklet has been prepared to bridge these existing knowledge and awareness gaps among advocates and citizens. It seeks to present a simplified and summarised view of the Court. It contains a brief description of the Court as well as a description of key issues governing the operations and processes of the Court.

The booklet is structured in six key parts. The first part introduces the Court. It then delves into the legal, policy and institutional framework governing the Courts operations. It also looks at the jurisdiction, roles and mandate of the Court. What types of cases can be brought before the Court? Are there time limitations for litigants to present their cases? Can a matter be referred from National Courts of an EAC Partner State? This part also looks at the structure and composition of the Court as well as the relationship between the Court and national level courts.

The second part of the booklet looks at the admissibility prerequisites such as the requirements for locus standi to appear before the EACJ; whether parties ought to satisfy the doctrine of exhaustion of local remedies (which is usually a key prerequisite in most international tribunals); filing fees etc. The third part deals with the trial process at the EACJ. It answers key litigation questions including, how does one lodge a case before the Court? How do you prepare pleadings? What stages are there during the litigation process? 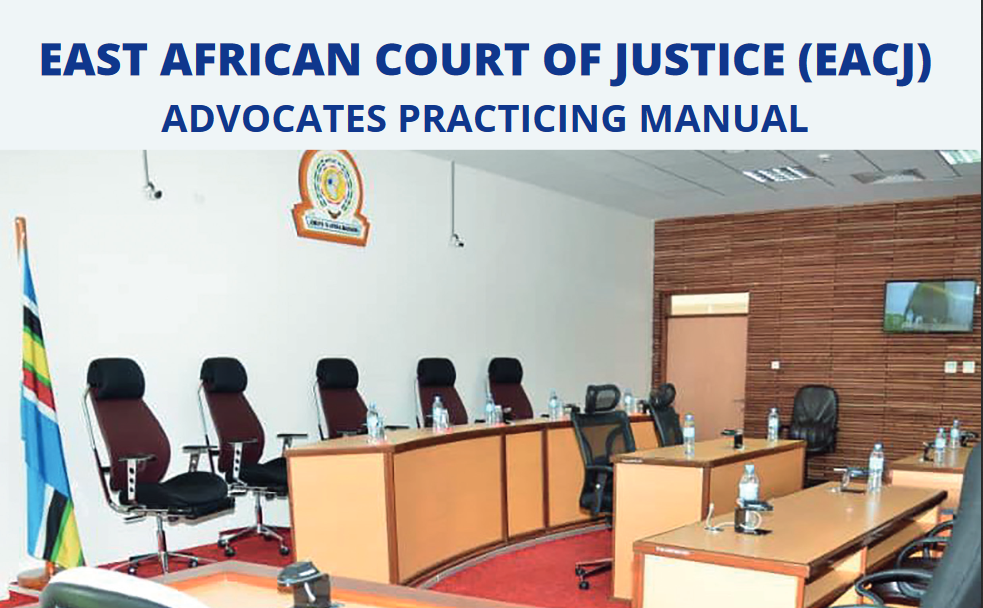 END_OF_DOCUMENT_TOKEN_TO_BE_REPLACED

© University of Nairobi 2020.  All rights Reserved.